Sam and I have been working on a collaborative project with a long time client for a month or so now. The client came with her original sketch and asked us to expand on her ideas and create a 54" bench for an entryway. We sent some sketches back and forth and I liked what was happening so much, Sam started a prototype base in the metal shop. One thing led to another and we decided on bubinga for the wood parts, added an inlay on the seat edge based on a picture of part of a sideboard she sent us, and after a couple tries, using photo printed enlarged versions of the inlay photo, we got the whole thing mocked up. We weren't totally happy with the feet we orginaly made so after consulting with Cynthia, we made a new one based on her input, which we liked a LOT better. Then, at her request we leafed the new foot sample with palladium, which is a cooler, more silvery version of gold leaf. After seeing that, we decided it conflicted color-wise with the curly maple of the inlay, so we're going to do another sample in real gold leaf, which I think will be very elegant. We're working on the parts for the real bench in the metal shop this week and we're moving the project along. It's going to be a fun one. Click the photos to enlarge....

Update 4 12 .... We're making progress. The base has been gold leafed, and it is an awesome sight ... It almost glows in the dark. Later, with the help of the the client, we'll rub it down to a slightly duller but still dramatic sheen. The frame of the seat has been inlayed and glued up ... You can see a video of our CNC router cutting of the channels for the inlay on You Tube. Next week we'll apply the bead molding and the octagonal end features. Then we'll finish it and await the fabric and the upholsterers schedule.

The seat frame inlayed and glued up 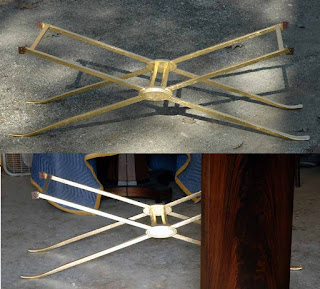 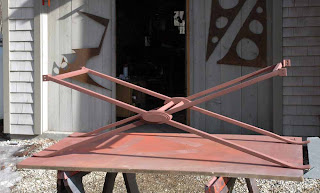 The bench base primed for the gold leaf 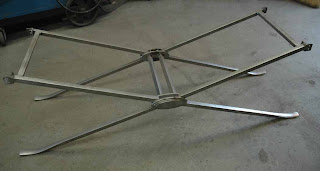 3/22/08 Meeting with the client today. Resolved some design issues ... 'dulled' down the gold leaf by burnishing it, giving it a softer and less Louis XV feel. After some discussion regarding the connector between the front and back x es , we settled on two 3/4 square solids , similar to the original prototype. All that's left now is to build the wooden bubinga bench part with it's 12 feet of ebony and curly maple inlay, finish the connector piece, gold leaf the base and antique it, make the slip seat and upholster it ....

Sunny day in the shop .... Gold leafed sample foot to the left 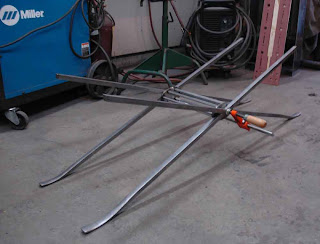 The bench without it's top structure in the metal shop Thursday
With a proposed (but too busy) connector ...

Our original bench mockup with the inlay photos and cushion mockup 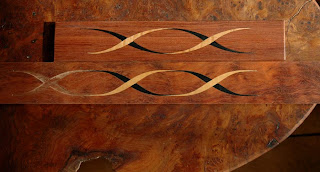 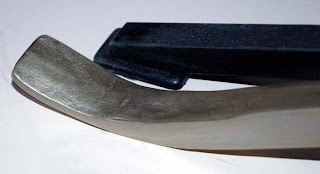 The new foot next to the original

The new foot with the palladium leaf

The inlay photo from the client